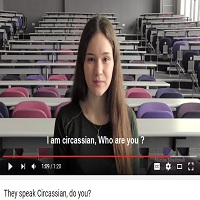 They speak Circassian, do you?

«They speak Circassian, do you?»

Despite globalization and the rapid development of English and Chinese as an international, many people are trying to preserve their identity, culture and language. The important is to create and maintain the conditions necessary for use of the native language and its development in modern conditions. So in March 2016 launched a project aimed at the preservation and promotion of rare languages, including the Circassian language. As part of this project is the study of intonation in speech-language media and the further application of the results for the development of modern technologies as the market for them is small and technologies develop slowly

For example, voice commands in English. much better than in Finnish, Circassian or any other rare languages.

In the EU, there is the protection of the Charter of rare languages, and it is partially supported by the project.

The European Charter for Regional or Minority Languages adopted by the 478th session of the Council of Europe Committee of Ministers of 25 June 1992 and opened for signature on 5 November 1992 in Strasbourg. To date, 24 have ratified the Charter of European states, including the two post-Soviet countries – Ukraine and Armenia.

The aim of the Charter is to define the protection and support of the historical regional or minority languages in the different countries and regions of Europe. The Charter should help to ensure that :

– maintain and develop cultural traditions and cultural heritage in Europe

– Respect all inalienable and recognized right to use regional or minority languages in speech and writing , in public and private life .

– create conditions for the teaching and study of regional or minority languages ;

To date, 100 participants in the study have been registered , and the registration of new participants continues. The project partners have expressed a desire to become Kabardino – Balkarian University . Berbekov , Pyatigorsk State Linguistic University ITMO University Media ” Shyhulague ” ( “Milky Way” ) Holding NatPress CBD and the Union of Writers . Also now our partners are leading such a project with the Finnish language

Since early May, the project is expanding and in partnership with the city of Maikop University carried out a study Adyga language. to participate in the study residents of regions of Russia were invited, saying Adygea or Circassian language.

Now there is a collection of soundtracks and Circassian Adyghe language. A special priority is in the age group 35-65 years.

It is necessary to create and continue to act according to the detailed instructions:

call the number listed on the site, 2 minutes read the text of and 2-3 minutes to answer the questions. Implement 5 such calls for 4-5 minutes with a break between recordings is no less than one day. It is important not to limit yourself with the terms of intonation so that intonation in words phrases corresponded to the culture of the native language.

Everyone can make a contribution to the preservation and development of the native language – participate yourself and invite the participation of relatives and loved ones!

We are very grateful for the dissemination of this information in the public or social organizations. institutions in Kabardino-Balkaria and Adygea. We are open and happy to Information Partnership
Calls are free for those who live in Russia