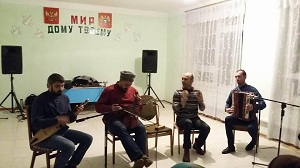 The Circassian folk music legacy is revived
A group of young men established a new musical band four months ago aiming at introducing the world with the traditional Circassian music(Jou-Джу) and the old songs which were forgotten in old versions of CDs and cassettes records ; besides, the band strives to rebuild the concept of the Circassian gatherings (Haeesh-Хьэ1ыш) with all that is included in them such as singing, discussing, and entertainments. Also it encourages the concept of singing in every gathering or meeting just like the old Circassian traditions used to be.
Recently, the band started a weekly tour to the Circassian towns in Nalchik City and made a concert to bring out this sort of music and share the old traditional songs with the world.
The band consists of:
Tembolat Keref , a singer and shecha pshina player and Circassian flute (ka mel) player.
Timur Kodzoko , choral and apa pshina player.
Bashir Khatsouk , choral and (accordion) pshina player.
Beabars Appesh (Бибарс Апыш) , choral and singer.