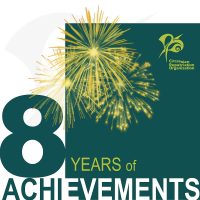 Today, we would like to reflect upon our achievements in the past eight years. Where we started, where we are now, and where we are heading. As we head into this new year, we are full of hope and optimism as we stand “Together for a Better Future”.

On February 10, 2014, the Circassian Repatriation Organization (CRO) was officially registered as an independent, non-profit humanitarian organization with no affiliation to any government, politically or financially. In addition to the CRO being involved in issues related to Circassian affairs, the CRO is also working towards securing the right of return to the Homeland for all Circassians in the Diaspora who wish to return.

With the help and support of other Circassian associations from the homeland and the diaspora, we were able to support Circassians around the world with a focus on humanitarian, economic, educational and relief initiatives, as well as the promotion and preservation of the Circassian language and culture.

By working together for a better future we have achieved a great deal so far. We are proud of our accomplishments and through your continued support, we will be able to keep working to support our programs. Let’s make the next eight years even better by working hand in hand.