This press release is in response to some anonymous media reports that falsely quoted the CRO. The CRO’s objectives and vision are clear and available in its website (www.croworld.org). All vision and mission statements, letters, and press releases are available on the CRO’s website. All other statements that are attributed to the CRO but do not appear on its website are falsely quoted and have no basis, regardless of the Organization’s stance on the discussed topic. It is unfortunate that some media outlets falsely quote individuals and the organization without consulting them about their stance on a specific topic.

The Circassian Repatriation Organization (CRO) is a not-for-profit, humanitarian, charitable and peaceful organization. The CRO is officially registered in Canada, however, it is an independent organization that is not affiliated with the Canadian government or any other governments or countries.

The CRO is an international organization that has one branch in the United States and is working actively on establishing several other branches in other countries. The CRO has members from almost 20 countries. The CRO is an international organization that cares about the welfare of all Circassians across the globe. The CRO’s foremost objective is to provide aid and assistance to the Circassian people especially throughout difficulties, and to lessen their hardships.

In 2015, the CRO initiated a new program called the Small Business Support Program (SBSP). The main objective of the CRO-SBSP is to provide the necessary supports to help Circassians settle, integrate in the new local environment in North Caucasus, and become financially independent. The CRO-SBSP has been offered every year since it started in 2015. Since its establishment, the CRO-SBSP spent around USD 50,000 to fund 21 small projects.

More recently, the CRO initiated a new pilot program called the CRO-Backpack Drive that aims to support students and their families cope with school expenses. This pilot project will be tested this year in the North Caucasus, with the ultimate goal of establishing a sustainable program to help support students everywhere. The CRO strongly values the role of education in achieving a bright future for young generations.

The CRO is a strong believer of collaboration efforts and the engagement of all members of the Circassian society. Therefore, the CRO dedicates all of its efforts to bring together all Circassian activists, associations and working groups to join their expertise and efforts in pursuing and achieving common Circassian goals, such as preserving language and culture, promoting better education, improving economical standards, and acquiring the right of return. 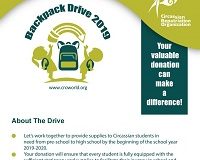 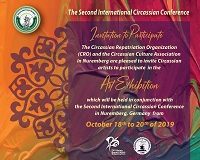